Deadly prostate cancer: from the blindness to the early visualization and detection

I had a friend. His name was José. A medical doctor who had specialized in gastroenterology and had no previous family history of prostate cancer, he was 65 when he decided to end his professional career after a lifetime of work, during which he had planned a pleasant retirement together with his family.

Our friendship began as a result of scientific collaboration and extended beyond science thanks to our love for gastronomy and red wine. We used to meet each other on a monthly basis to see each other and update each other around the table.

I will never forget the day I saw him crossing the door at the restaurant in a serious mood, far beyond the firmness and rectitude that characterized him. Was he worried? Was something not right? I thought to myself.

“Angel, I need to tell you something I’m concerned about. I’m having hematuria, I lost 5kg this month and my left iliac crest hurts like hell. I had a PSA test and I am over 500, do you understand what this means?”.

I perfectly did. All this information pointed to a metastatic prostate cancer.

There is a popular myth that surrounds prostate cancer and characterizes it as non-fatal or non-concerning. Although it is true that most men die ‘with’ prostate cancer and not ‘of’ it, we cannot overlook the facts and mortality rate associated with this type of cancer: about 1 in every in 41 men will die of prostate cancer and it currently stands as the second leading cause of death from cancer in men, right behind lung cancer.

Once prostate cancer has spread beyond the prostate, as in the case of José, survival rates decrease significantly. For men with distant metastasis of prostate cancer, only 1 in 3 will survive for five years after diagnosis. Sadly, José passed away 2 years after receiving his diagnosis and could not fulfill his retirement dreams.

What do we need to change?

There are several complementary methods for prostate cancer detection, each one with its own advantages and disadvantages. All of them are weapons of choice in the war to detect cancer. Although Digital Rectal Examination (DRE) has low sensitivity and specificity for detecting prostate cancer, some lesions can be detected by palpation of irregularities in the prostate lobes. The Prostate-specific antigen (PSA) test and its derived metrics (total PSA, PSA density, PSA aged adjusted, among others) have shown a limited sensitivity of 21%¹ when a cutoff value of 4ng/mL is used [Wolf et al. 2010]. This sensitivity in high grade and advanced stage tumors can increase up to 51% of cases.

Medical imaging techniques, more specifically Multi-Parametric Magnetic Resonance Imaging (MRI) with a magnetic field strength of 3 Tesla, have shown to have an increasingly larger role in the detection and staging of prostate cancer. To illustrate this, multi-variate analysis of an independent cohort including age, family history, prior 5-alpha reductase inhibitor use, digital rectal examination findings, PSA level, PSA density, and MRI, showed that only MRI screening was predictive of clinically significant (Gleason score ≥7) prostate cancer diagnosis among men without a history of previous prostate biopsy [Weaver et al. 2015].²

Despite of the limitations of DRE and PSA, patients with suspicious DRE or PSA were frequently referred for a ‘blind’ prostate biopsy prior to August 2019. The term ‘blind’ refers to the fact that several cylinders containing cell samples were extracted from different regions of the prostate through transrectal or transperineal needle access.

In August 2019, a systematic review and meta-analysis with a total of 2582 patients were published in the Journal of the American Medical Association (JAMA) by Elwenspoek MMC et al., concluding that prebiopsy MRI combined with targeted biopsy (after the identification of the lesion in the MRI) is associated with improved detection of clinically significant prostate cancer and reduces numbers of biopsy cores per procedure (77% reduction compared to systematic biopsy alone), while potentially avoiding unnecessary biopsies in 33% of cases. Ever since this momentous review, the number of prostate MRI examinations has been growing dramatically worldwide.

Additionally, a structured report (Prostate Imaging–Reporting and Data System, PI-RADS 2.1) has been proposed to homogenize the radiological reporting of prostate cancer in clinical routine. The last version (version 2.1) was published in 2019 and developed by a group of international representatives from the American College of Radiology (ACR), European Society of Urogenital Radiology (ESUR), and AdMeTech Foundation.

Standard-of-care prostate MRI examinations include the acquisition of transverse T2, diffusion-weighted imaging (DWI) and (not always) dynamic contrast-enhanced (DCE) series. Beyond the conventional radiological reading, these series allow us to extract vast amounts of information relevant to lesion detection and staging through the combination of artificial intelligence (AI) techniques and the obtention of imaging biomarkers. This process can be completely automated through an analysis pipeline that sequentially carries out all of the following operations in seconds: image upload, generation of a quantitative report for urologists’ use in tumor detection, preliminary staging through imaging, and targeting of the biopsy to finally diagnose prostate cancer after a histopathological evaluation and Gleason scoring.

The increased volume of prostate MR examinations worldwide demands for automated AI tools that regionally analyze the prostate in a detailed manner and allow for accurate differentiation of the transitional zone, peripheral zone and seminal vesicles. The localization of the tumor is related to its stage (i.e. seminal vesicles involvement) and, therefore, the prostate gland and surrounding areas should not be considered as a whole but in an anatomy-driven manner. In summary, the prostate should not be considered a uniform ‘ball’ if we want to guarantee the success of AI tools.

Before the widespread use of convolutional neural networks (CNN) in 2012, it was not possible to automate complex tasks like prostate segmentation on MRI images. Now, thanks to AI, we have achieved it. QUIBIM, in its own war on cancer will soon provide a disruptive automated solution- efficient and standardized reporting- for prostate MRI analysis,- so stay tuned!

In the memory of my dear friend José in the Prostate Cancer Awareness Month. 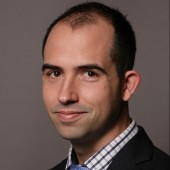 Telecommunications & Electronics Engineer by the Polytechnics University of Valencia. Master in Biomedical Engineering and PhD achieved in 2010 by the Polytechnics University of Valencia, due to his research in the application of advanced image processing techniques to high spatial resolution Magnetic Resonance images for the study of bone structure. In the professional aspect, he is scientific-technical director of the Biomedical Imaging Research Group at La Fe Polytechnics and University Hospital and an entrepreneur and co-founder of QUIBIM (Quantitative Imaging Biomarkers in Medicine) company. He previously served as Director of Biomedical Engineering (2012-2014) and R&D engineer (2007-2012) in Quiron Hospital Group. He is the inventor of two patents in the field of medical imaging. He is also the author of over 25 scientific articles, 60 communications to international congresses and 10 book chapters. He has participated in a number of research projects and clinical trials. He is an active member of several scientific societies, among which the European Society of Medical Imaging Informatics (EUSOMII) being a member of the Board. He is also a member of the eHealth and Informatics subcommittee of the European Society of Radiology. In the educational area, he is collaborator of the Polytechnics University of Valencia in the supervision of final projects, theses and PhD’s and of the Faculty of Medicine at the University of Valencia as lecturer at Advanced Medical Imaging. In 2012 he was awarded by the Polytechnic University of Valencia with the Best PhD in the field of ICT’s and by the European Society of Radiology with the Best Scientific Paper Award for its advances in the application of engineering to the study of cardiovascular remodelling. In 2013 he received the Pro-European Academy Prize award, given to leading scientists exemplary groups in science and academic life. In 2014 he was recognized by the European Society of Radiology with the award for the best scientific contribution in the field of oncology. In November 2015 he was awarded by the Massachusetts Institute of Technology (MIT) official publication MIT Technology Review, with the award "MIT Innovators Under 35".

All stories by: Angel Alberich-Bayarri

We use cookies to ensure that we give the best user experience on our website. If you continue to use this site we will assume that you agree.I agreeCookies Policy